Hairlessness is a trait which has occurred in several places at different times. Hairless cats have been reported in Latin America in 1830’s. There are also reports of this mutation occurring in France, Austria, the Czech Republic, England, Australia, Canada, USA, Mexico, Morocco, Russia, and Hawaii.

The origination of a breed of hairless cats that we know today as the Sphynx began in the mid-1960's with the birth of a hairless kitten to a black and white domestic shorthair queen in Ontario, Canada. After purchasing these cats in 1966 and initially referring to them as "Moonstones" and "Canadian Hairless," Mr. Ridyadh Bawa, a science graduate of the University of Toronto, combined efforts with his mother, a long time Siamese breeder, and the Tenhoves to develop a breed of cats which have been renamed the Sphynx. It is apparent that the Bawas and the Tenhoves were the first individuals able to determine the autosomal recessive nature of the Sphynx gene for hairlessness. They were also successful in transforming this knowledge into a successful breeding program with kittens which were eventually capable of reproducing. The Tenhoves were initially able to get the breed Provisional showing status through the Cat Fanciers' Association (CFA) but ultimately had the status revoked in 1971 when it was felt by the CFA Board that the breed lacked both a consistent standard and an adequate gene pool. At this time, the breeding program withered with the final traceable lines being Bawa cats--Mewsi-Kal Johnny, Mewsi-Kal Starsky and Prune's Epidermis.

Today’s Sphynx, like so many other cat breeds, are the creation of the simultaneous work performed by mother- nature and many people that were committed to the breed.  Two different sets of hairless cats were discovered in North America in the 1970's. These cats provided the foundation cats that have made the Sphynx breed what it is today.

The first noted naturally occurring Sphynx came from Wadena, Minnesota on the farm of Milt and Ethelyn Pearson, who identified hairless kittens occurring in several litters of their barn cats in the mid 1970's. The other set of foundation Sphynx cats were identified by Siamese breeder Shirley Smith in Toronto, Ontario in the late 1970's and early 1980's.The three hairless cats identified by Ms. Smith derived from three separate litters of a single black and white domestic queen bred to different males. Bambi was the first of the three kittens. He was a black and white male born in 1978. Bambi died at the ripe old age of 19 years.

The next two Sphynx, Paloma and Punkie, were females born in 1979 and 1980. They went to a Dutch breeder Dr. Hugo Hernandez. Dr. Hernandez was unable to develop any viable kittens from the breeding of these queens to Mewsi-Kal Starsky (a cat from the original Bawa line), so he had Starsky neutered and outcrossed Punkie to a nearly hairless Devon Rex yielding a litter of  Sphynx  kittens. The kittens had varying degrees of hairlessness. With this they were able to expand the breed over the next three years while also having the breed recognized by TICA in 1985 at the Championship level.

In 1985 Walt and Carol Richards of Britanya Cattery in Texas bred their Devon Rex female to a European Sphynx at the request of TICA Genetics Chairwoman Dr. Solveig Pflueger, who was employing the knowledge gained through Dr. Hernandez's historic outcross breeding.  The result of this breeding was a litter of four Sphynx kittens including Britanya's Lady Godiva, who became TICA's first Supreme Grand Champion and first Best International Sphynx in the spring of 1987.  Also produced, were QGC Britanya's Lord E, I'm Naked! who became TICA's first Sphynx Outstanding Sire.

During the next 10 years the Sphynx breed developed a broader gene pool as the result of selective outcrossing with the Devon Rex and American Shorthairs. The  Sphynx breed continued to gain popularity in the 1990's and gained acceptance into the ACFA Championship class in 1994 and CFA Miscellaneous class 1998 and are currently shown in the CFA for Championship class as well.

After many years of trial and error there are now five major international breeder groups (ISBFA, NASAR, PSA, SARA, SCC) that recognize the Sphynx as a breed.

The Sphynx are a unique breed with a fabulous personality. I am so thankful for all of the hard work and research done by previous and current breeders without them I may have never gotten to know such a wonderful breed of cats. They are truly a joy to raise and have in my home! 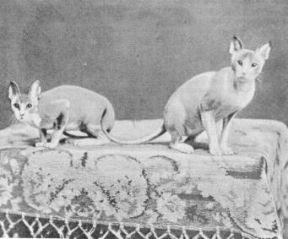 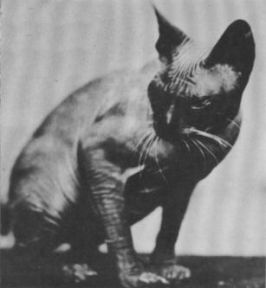 A bald cat was reported in France In 1966

Do NOT follow this link or you will be banned from the site! Scroll To Top